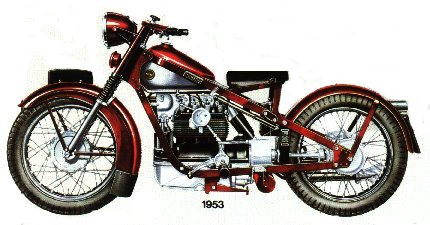 A Danish Classic
by Harry V. Sucher
Most of the better known high production antique motorcycles have had their histories exhaustively explored. Interest is now turning towards the lesser known and more esoteric makes. Such is the Danish Nimbus, distinguished by the fact that it remains the sole example of the industry ever made in that country.

Nimbus had its origin in the work of Peter Anders Fisker, a one-time high school physics teacher turned inventor, who at the turn of the century began to experiment with improved and simplified versions of electric motors. In 1905 he opened a small factory near Copenhagen where he later developed and patented a practical household vacuum cleaner under the trade name of “Nilfisk.”

At that time, the primitive “clip on” type motor bicycles were coming into use, and Fisker, noting their low cost utility for the average working man, decided to create a more refined version. Subsidized by his successful vacuum cleaner sales, a portion of the factory was now devoted to motorcycles.

Fisker’s original machine was powered by a small four cylinder in-line engine hung below a large diameter pipe-like tube that held both fuel and oil, much like the familiar American Pierce. The small capacity side valve engine was slung below this by four steel straps. The suspension was by girder forks and a swinging arm in the rear supported by large coil springs. A shaft from a two-speed gearbox ran to the rear wheel via the left fork tube. This machine ran well, but seemed a bit short on power for its weight. It was produced in very limited numbers (about 1,300 units) between 1919 and 1928. It was said that its high cost and mild performance made it non-competitive with simpler and cheaper makes imported from Germany. 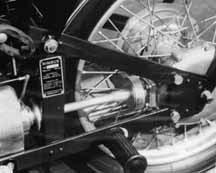 In 1932, Fisker decided to take another look at motorcycle design. With his son Anders’ help, prototype work began in a newly built wing of the factory. The final outcome was a compact machine with a four cylinder in-line 750 cc engine. The crankshaft was supported at either end by ball bearings. The crankcase was cast alloy, and a one-piece cast iron cylinder block was topped by a single piece cylinder head carrying an overhead camshaft.

The overall design owed much to the contemporary British MG car. The crankshaft drove the upright dynamo in front of the block through a set of bevel gears. From the rear end, the extended dynamo shaft drove the overhead camshaft through another set of bevel gears, the distributor coming off the end. Conservatively rated at 18 hp at 4,000 rpm, the power was taken to the rear axle via a three speed car type hand-shifted gearbox. Engine life was enhanced by a mild 5:1 compression ratio.
The frame of the machine was made up of steel strapping, the steering head being a tube welded into the top ends of the strapping. Bolted on steel plates reinforced the structure, steel plates were welded into the rear to carry the axle and bevel drive assembly. In 1934, the sales campaign was announced, with production carried out until 1959. The only visible change was the fitting of a foot gear shifting mechanism in 1935.

While Denmark had an extensive industrial capacity, much of the economy was based on dairy production. Much of Denmark’s export business was butter, cottage cheese, and related products. Many of these farmers relied on a box bodied sidecar for transport, and the Nimbus filled this need. In 1937, a “Sport” Nimbus was offered, with a 5.7:1 compression ratio at 4,500 rpm. This gave a 60 mph speed without affecting its sidecar pulling power.

A useful feature of the Nimbus was its plunger type fork. In fact, Fisker obtained an international patent on its construction. It was undampened, but strongly built with heavy bottom yokes and a very rigid axle mounting. It is said that BMW based their forks, which came out two years later with hydraulic dampening, on the Fisker design.

The Nimbus machines were not produced continuously, but rather at certain periods and in batches of twenty-five. The average output was around 800 units per year. Both the Danish Post Office system and the country’s small standing military force were the main purchasers of Nimbus. The post office system used box-bodied sidecars while the military purchased sidecar passenger types. A substantial portion of the sidecar market was lost in the 1950’s when the Danish Army changed to the 350cc two-stroke German Maico motorcycles. These machines were designated as the official machine for the North Atlantic Treaty Organization (NATO) since they were more suited for off-road and all-terrain use. The Danish Post Office, at long last, eliminated their sidecar units in 1976, when they changed to small minicar vans. While Nimbus production had been modest, the company had concurrently produced large quantities of spare parts which were sold to the post office, the military, and civilian users.

After twenty-five years of manufacture, and something over 10,000 units were produced, motorcycle production was ended in 1959. Due to the healthy amount of spare parts produced, many Nimbuses are still seen in Denmark today. A few machines were exported to Germany, as well as to the other Scandinavian countries, but most were sold on the domestic market. In addition, today there is an active cottage industry conducted by various enthusiasts. Many surviving examples are still on the road and appear to have a definite future.

I visited Denmark on two separate occasions; in 1983 and 1985. I was fortunate to be offered a test ride on both solo and sidecar models. The bike started easily after I flooded the carburetor and gave two or three kicks on the crank. The engine has plenty of torque and, with sidecar gearing, moves the outfit along easily in high gear at a steady 45 mph. (Luckily, Denmark is a flat country with but few gentle hills.) In solo form, a cruising speed of about 59 mph seemed most comfortable on the engine.