Motorcycle where made by Fisker & Nielsen Pty. Ltd. Copenhagen, Denmark. 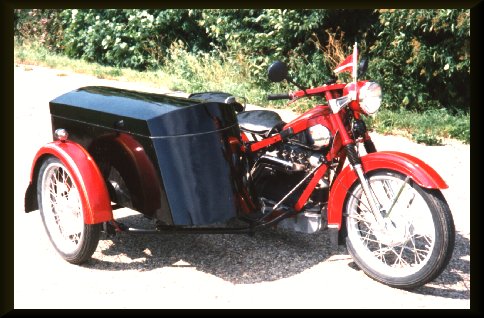 The first Nimbus was presented to the public on the 20th of April 1919, by its inventor P.A.Fisker. That Nimbus soon got the nickname "Stovepipe" for its cylinder formed petrol tank, the Stovepipe had a four cylinder in line motor on 746cc, it was a side valve and the final drive was shaft drive, it was a very strong and power full bike for its time.

In the early thirties P.A.Fiskers son, Anders Fisker now joint the company and together they invented the Nimbus.

The first "Nimbus" came of the production line in 1934. It was a very different Nimbus to the old "Stovepipe". The new Nimbus had a four cylinder, in line motor but this time with top valve and over head cam.

An important thing to mention was the telescopic front fork. It was the first time ever that a motorbike had a telescope fork, so that means that Nimbus was the first bike in the world with a telescope fork. In the years from 1934 to the end of 1959 there where only 12,715 Nimbus ever made.